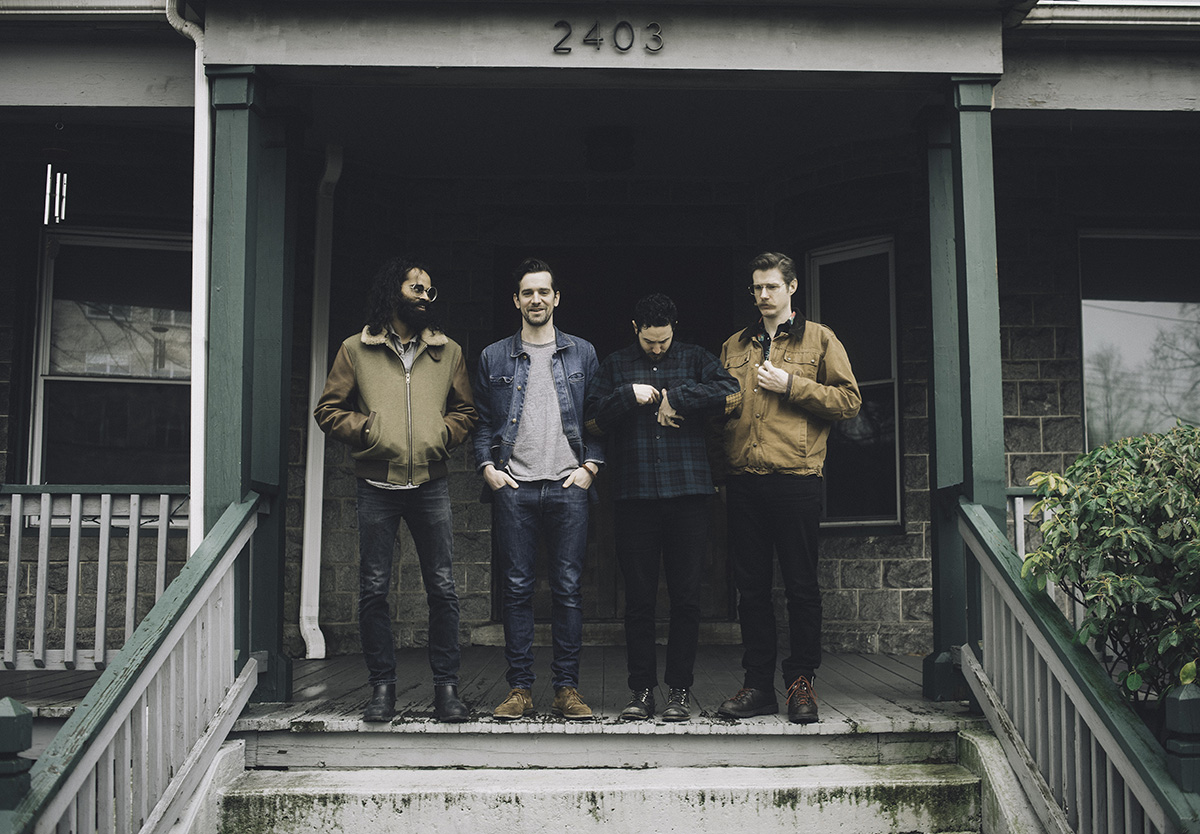 If Darlingside’s first album, Birds Say (2015), focused on the past through nostalgia, and their second, Extralife (2018), contemplated uncertain futures, Fish Pond Fish stands firmly in the present, looking at what’s here, now. Dave Senft (bass), Don Mitchell (guitar, banjo), Auyon Mukharji (violin, mandolin), and Harris Paseltiner (cello, guitar) have created a natural history in song—taking us into gardens, almond groves, orchard rows, down to the ocean floor and under stars.

The band has long been praised for their harmonies and intelligent songwriting, described by NPR as “exquisitely-arranged, literary-minded, baroque folk-pop,” and their dynamic presence (crowded tightly together onstage) have made them a live-performance favorite. But this album showcases their broader storytelling abilities: nature is a looking glass, the songs suggest, with tracks like Ocean Bed, Green + Evergreen, Mountain + Sea, and Crystal Caving making metaphors of their titles. An experience of nature is an experience of self; an experience of self is one of natural change cut and complemented by stasis.

The band started studio recording Fish Pond Fish in late 2019, when they moved into Tarquin Studios—the residential studio of Grammy Award-winning producer Peter Katis (Interpol, The National). Living and working together brought them to their very early years under one roof in Hadley, Massachusetts, which had seeded the origins of their intimate collaboration. At Katis’s suggestion, many components of the initial demos were preserved as layers in the produced tracks to retain the spirit of the initial recordings, resulting in a collection of songs that is simultaneously the most bedroom-tracked and production-heavy full-length album that the band has yet released.

Fish Pond Fish is one of geology, meteorology, ornithology, astronomy and botany. Band members Dave Senft (vocals, bass), Don Mitchell (vocals, guitar, banjo), Auyon Mukharji (vocals, violin, mandolin), and Harris Paseltiner (vocals, cello, guitar) have created a natural history in song. An album that catalogues the weird nooks of our world with the same curiosity of a botanist’s time-worn field journal. We’re led through old growth forests, down to the deep sea’s ‘true blue bottom where the light ends,’ and up to a few singled-out stars that shine ‘ochre’ overhead. Introduced with Woolgathering—as much a beckoning as it is a first track—we are then taken through an album of gardens, orchard rows, almond groves, and past morning glory vines. With daisies and tidal shifts, singing cicadas and insects blowing over the ocean, murmurations of starlings and a circling sparrow hawk, we enter an ecology of emotional experience. “Through the oak and poison ivy,” the four sing in Green + Evergreen, “As the lemon light was alkalining / I was growing, I was dying / Growing I was dying.” Here is an album to use alkaline when thinking sunlight, and, more, finds the word best to describe that great organic paradox of growing towards death.

The band, which saw their ten-year anniversary in May of 2020, has long been praised for their harmonies and intelligent songwriting, described by NPR as “exquisitely-arranged, literary-minded, baroque folk-pop,” and which The New Yorker compared to David Crosby and the Byrds. Their dynamic presence (crowded tightly together onstage for the audience to witness four voices turn to a singular texture of sound), paired with their sharp wit and wordplay, have made them a live-performance favorite, and their songs treasures for literary and lyric-loving fans.

But in addition to the usual vocal charms and wordsmithing within verse, Fish Pond Fish makes a finer point on the band’s broader storytelling philosophies. The story here, it seems, is submitting to forces larger than yourself in the same way you do when heading outside—throwing your head back to the stars or diving down to the ocean floor, looking for something without really knowing why. “In every walk with nature,” naturalist John Muir wrote over a century ago, “one receives far more than he seeks.” Nature is a looking glass, with songs like Ocean Bed, Green + Evergreen, Mountain + Sea, and Crystal Caving making metaphors of their titles. An experience of nature is an experience of self.

The experience of nature, and therefore of self, in this album is one of stasis and change. You notice change, and might desire to return to past states. Lyrics like “Keep coming home,” “Take me back to south of Denver,” and “Tired of chasing running following,” follow that thread. With change, comes the repeated actions of passing time (“Time will see every tide recede / on the hour every hour”). In some cases, repetition and return are a desirable way to deal with uncertain times (“Every little thing and large is off its track and banking hard”); in others, the stagnancy of the present is overwhelming (“Nothing growing but the trees erupt in black light and gold / you can’t repurpose what was never there.”) Much of the album considers how repetition and change complement one another — how either one can be a stress or a salve depending on the circumstances, and how even change itself predictably repeats (“Things will change and change again.”).

The band started studio recording Fish Pond Fish in late 2019, when they moved into Tarquin Studios—the Bridgeport, Connecticut residential studio of Grammy Award-winning producer Peter Katis (Interpol, The National). Those days included late-night and early morning recording sessions, family-style meals, and up to four separate recording rigs running in tandem. Living and working together in a residential studio brought the band to their very early years living and writing together under one roof in Hadley, Massachusetts, which seeded the origins of their intimate collaboration.

The bedrock of the album reflects that collaboration, pervading almost every aspect of its making—from the multi-layered sound to the early stages of songwriting. “Song ideas emerged mostly from group exercises,” Dave Senft said of making Fish Pond Fish, “without much premeditation or discussion until after the kernel of the song already existed. This yielded more lyrically-driven ideas, or at least more lyrically-developed ideas earlier on in our process.” That ‘kernel of song’ sprouted and eventually flowered into something far beyond what any one band member could foresee. Everyone was pushed to a new place in every level of songwriting. “There’s truth beyond the bounds of your horizons,” Auyon Mukharji says of collaborating with three other people. “It’s like you’re searching through three-fourths of foreign consciousness. Bringing you to a place you couldn’t imagine. You move beyond yourself.”

At Katis’s suggestion, many components of the initial demos were preserved as layers in the produced tracks to retain the spirit of the initial recordings, resulting in a collection of songs that is simultaneously the most bedroom-tracked and production-heavy full-length album that the band has yet released. (In Ocean Bed, a dog can be heard barking, along with an iPhone recording of a faulty washing machine.)

Like the powers of nature winnowing out the fittest, shaping the crowns of flowers or horns of a deer or arc of a goldfish’s fin, the most profound biological event of our generation also shaped this album. The 2020 pandemic came just as the band was finalizing lyrics for the last batch of songs, which forced them to cancel the final weeks of recording at Tarquin Studios. Since they were unable to meet up in person during the quarantine, each member set up a home recording rig to capture sounds individually, while mixing, writing, and arrangement decisions were all carried out virtually. The band’s favored approaches for sound capture (playing and/or singing together around one mic, for example) and in-studio discussion were made impossible by the quarantine, so they evolved. They were forced to lean more heavily on individual experimentation and decision-making, both in recording and editing. As a result, the album bears an imprint of each of the four members in a way their previous releases have not. It’s sonically dense yet individually marked, impossible to categorize by one texture.

Releasing an album during a pandemic is hard, but here is their offering: a celebration of life, in all its impulses and foliage and circling birds. “I picked the fruit,” they sing in See You Change, “It was right / In my hand / And it came to life.” They’ve given us a look at the weird and bursting offerings our planet has drummed up over the past three billion years—from tides to starlings to gravity. Here, they sing, take this fruit, and watch it come to life. 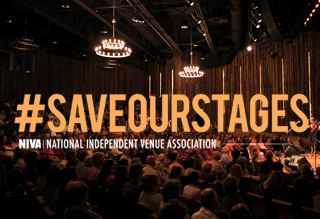 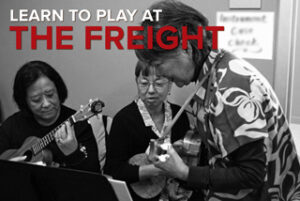