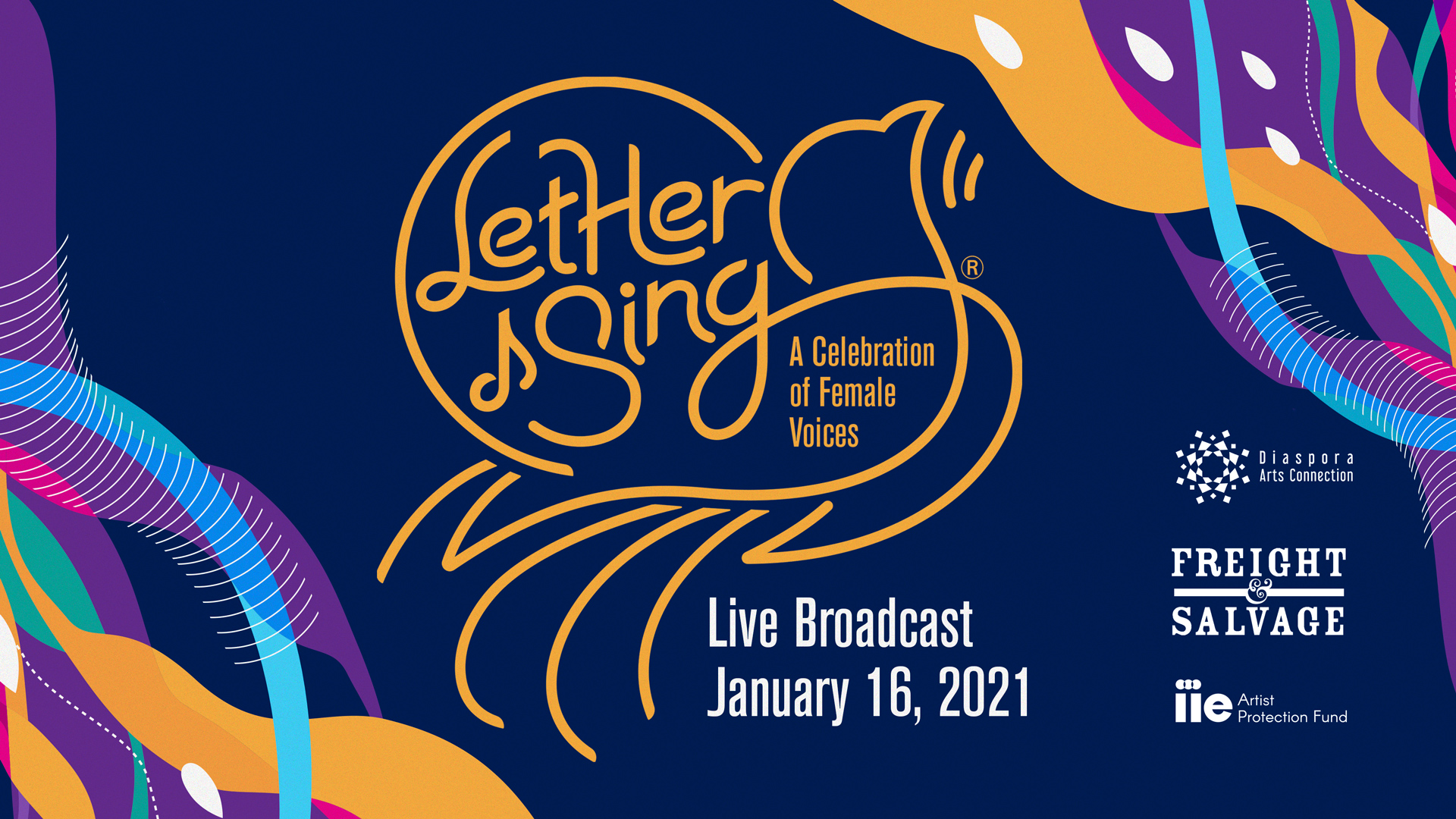 For the fourth year running, Diaspora Arts Connection is proud to present Let Her Sing® 2020: A Celebration of Female Voices, recorded live at the Freight & Salvage in Berkeley. The event will be broadcast via digital platforms on January 16, 2021 at 7PM.

Seven female vocalists from Iran, Lebanon, Vietnam, Kurdistan (Turkey), and the US come together with a group of exceptional international musicians to celebrate the female voice; suppressed, censored, and threatened in parts of the world. Join us for an online event of exciting music and solidarity for the female voice.

Our gifted Musical Director Erwin Khachikian will return to manage our stellar vocalists and musicians. The multi-talented musician and actress Naima Shalhoub will be our Master of Ceremonies. Once again, our Artistic Director Navid Ghaem Maghami will join our group alongside our Video Director & Editor Mohammad Talani. Camera: Vahid Zamani.

Hair styling services provided by Negda Hekmat. We are grateful for the help of Dr. Maryam Amini and Dr. Dariush Zandi and our COVID-19 Safety Coordinator, Kavian Ravandoust.

For more information about Let Her Sing, visit www.diasporaartsconnection.org/lethersing

Mina Alali: Mina Alali is a singer-songwriter and entrepreneur from Northern California, who recently graduated from Berklee College of Music. She signed to an indie-record label based in Sacramento in October 2016 and has directed six of her own music videos, many of which surround topics of social justice and awareness such as immigration policies, LGBTQ topics, feminism, and eating disorders. Mina is now creating an app, Busk It, for artists and musicians to perform via live-streaming in order to become discovered by people around the world and receive money for their art.

Mai Khoi: Mai Khoi is a Vietnamese artist and activist. At the age of 12 she wrote her first song and joined her father’s wedding band the same year. She rose to stardom in 2010 after winning the Vietnam Television song and album of the year awards. Several years later she became increasingly uncomfortable having to submit her work to government censors and, thinking she could reform the system from within, nominated herself to run in the National Assembly elections on a pro-democracy platform. Her campaign sparked a nationwide debate about political participation and culminated in a meeting with Barack Obama in May 2016.

Shortly after Mai Khoi started the avant-garde dissident trio Mai Khoi Chém Gió and the group released their debut album “Dissent” in 2018. Working at the interface of art and activism Mai Khoi has developed her most unique art form to date. Her new sound is an emotionally-charged fusion of free jazz and ethnic Vietnamese music, with her most political, yet personal, song lyrics ever. Today, she leads efforts to promote freedom of artistic expression in Vietnam for which she was awarded the Vaclav Havel International Prize for Creative Dissent. Her activism has, however, come at a high price. She has had her concerts raided, been evicted from her house, and has been detained and interrogated by the police.

To date Mai Khoi has released eight albums. She has toured the US, Europe, Australia and Taiwan. Mai Khoi is an Artist Protection Fund Fellow.

Rabbit Quinn (Leila Motaei): San Francisco-based pianist, vocalist and songwriter Rabbit Quinn crafts otherworldly fables reminiscent of unconventional piano rock storytellers such as Kate Bush, Nina Simone, Tom Waits and Tori Amos. History, myth and literature transform Quinn’s footprints into compositions which are delicate, dark and romantic. Born in Saratoga to a classical pianist father from Azerbaijan, Quinn’s childhood was steeped in the diverse flavors of both Middle Eastern and western classical music. Her American ancestors were members of a string band from West Virginia that traveled the Appalachians during Prohibition, and her grandmother, Quinn, passed down the tradition of grassroots and Celtic folk songs. Rabbit wrote her first song, “Diamond,” in kindergarten when she found herself humming while staring at sunlight filtering through a Mulberry tree canopy, and suddenly felt like God had dropped a glittering gem in her lap. Quinn began work on her powerful debut offering, Lost Children, while studying music at UC Davis. Skilled at drawing and painting, she also created the artwork for the album. The songs of Lost Children are cathartic, poetic snapshots exploring themes of self-worth, death, sexuality, transformation and heartbreak.

Her second album, “Painted Fan” marked a creative turn with a darker tone, American gothic and soul influences and executed with the use of a full band. It was recorded at John Vanderslice’s renowned studio, Tiny Telephone, in Oakland.

She is currently working on adapting her latest project, ”Piano Noir” to video and will launch her Patreon in January, 2021, along with the first installment of Rabbit Quinn Presents: Piano Noir.

Evin Şah: Kurdish musician and actress Evin Şah was born in 1979 in the village of Muş Yürecik (Zengök). She graduated from the Department of Turkish Music and Folk Music at Istanbul University State Conservatory in 2007. She studied under Fatma Karacan while teaching voice lessons herself. Evin has acted and performed in numerous television series and films in Turkey. She is a multi-language and -dialect artist. She and her musician husband Oktay Şahin live in the San Francisco Bay Area.

Naima Shalhoub: Naima Shalhoub is a Lebanese Arab-American vocalist, composer, performing artist, and educator based in the Bay Area. Her multidimensional work explores the borderlands of belonging, remembrance, freedom, and the expansive quality of the voice – its power for healing and energizing social justice movements. Her first full-length studio album, Siphr, was released on August 6th, 2020.

Her debut album, Live in San Francisco County Jail, was recorded alongside an audience of incarcerated women with whom she had been facilitating weekly “Music and Freedom” sessions for one year (many of whom participated in the performance). Produced in solidarity with movements to end the prison-industrial complex, the recording embodies Naima’s deeply-held belief that “it is an artist’s duty to reflect the times” (Nina Simone).

In addition to performing regularly from nationally-acclaimed venues to grassroots community event spaces, Naima has an MA in Postcolonial Anthropology and is a seasoned Restorative Justice practitioner and circle-keeper with experience in public schools, Juvenile Halls, and communities from California to Kenya. She currently is the Restorative Women and Girls Coordinator for Restorative Justice for Oakland Youth (RJOY). She also performs for theater productions, fundraisers, and presents at conferences such as the National Campaign to End the Israeli Occupation, and TEDxLAU in Beirut. /

Mahsa was born October 29, 1973 in Tehran. She entered Tehran Arts University in 1994 and graduated with a B.A. in Music in 1999. She strongly believes in creating a universal expression of music based on her traditional and regional musical roots. She has taken part in numerous world music festivals and concerts in countries around the world and has been performing as an independent singer and musician for nearly 3 decades.

Without being visible in her own society because of restrictions of female solo voice after the Islamic Revolution in 1979 in Iran, she and her sister Marjan have continuous contact with a large audience who highly appreciate their art, both in Iran and abroad.